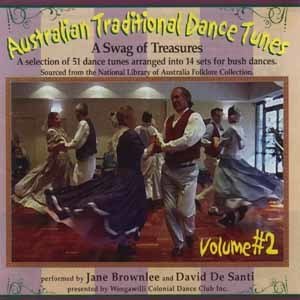 They have been arranged in 14 sets for various dances. It was recorded and engineered at the National Library of Australia by Gregory Downton.

This recording formed part of Jane Brownlee and David De Santi's inaugural National Library of Australia Folk Festival Fellowship in 2004 along with a concert performance at the 2004 National Folk Festival.

Jane and David spent 2 months going through a portion of the huge folk music collection at the National Library of Australia and found a number of song and tune treasures to help fill up the growing swag of Australian folk songs and tunes.

The majority of the tunes used are authentic tunes collected from older dance musicians by folklorists since the early 1950s. The tunes have been collected from recordings, printed books, transcriptions and handed-on scraps of paper.

The musicians on the recording